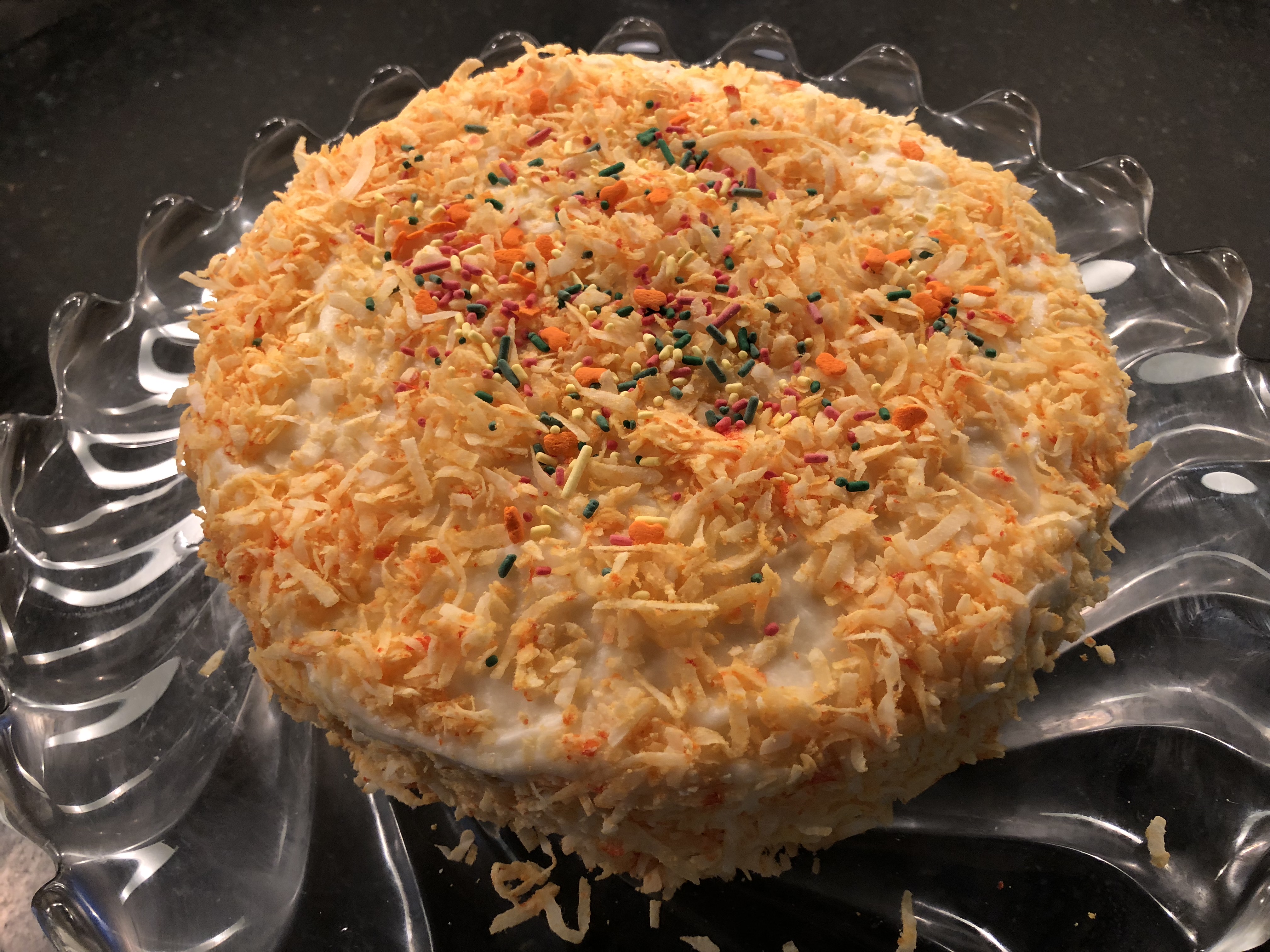 I routinely ask myself why I even bother to make artwork that hangs on a wall simply to make our rooms look nice.  Really.  When some folks have barely enough coins to feed themselves and others with no walls at all to hang things on, I question my motives.

But the reality is that, like most artists, I simply have to create.  A light flashes in my minds eyes and I see an image that I must quickly sketch out to preserve the thought.  The process of producing the image in my medium may take weeks or months, long after the inspiration is gone.  Paint, more paint, setting the paint, cutting, stitching, cutting, stitching, quilting, stretching; it’s a process that is so labor intensive I must record the inspiration so I can recall the image later as I go along.

But sometimes I have to do something quickly to satisfy the urge.  Case in point; cake.  I had just been inspired and Halloween colors were dancing in my head when David requested my incredibly delicious, yet white on white on white, coconut cake.  Not feeling very neutral, the cake became my quick canvas for color.  Enjoy my recipe below!

Prepare two 8″ cake pans.  Trace around the bottom of a pan onto folded waxed paper using a knife or scissors then cut the tracing yielding two circles.  Liberally grease the bottom and sides of the pan with unrefined coconut oil.  Stick a round of waxed paper onto the bottom of each pan smoothing it out then grease over it.  Sprinkle and shake flour around in each pan until it is evenly coated; shake out the excess.  Set aside.

Sift together and set aside:

Mix together and set aside:

Separate then set aside:

In a stand mixer or with hand-held mixer mix until very creamy:

Add to the butter bit by bit mixing until it is light and fluffy:

Add to this mixture one at a time until creamy:

Add reserved flour mixture alternating with milk mixture, one then the other in three batches, mixing very well after each, scraping down the sides of your mixer with a spatula.

Whip the egg whites with:

When creamy and white, add bit by bit whipping until soft peaks form:

Fold these whipped egg whites into cake mixture.  Scoop into prepared pans and smooth.  Drop pan firmly on counter to level batter and get rid of air bubbles.  Bake for 25-30 minutes or until a toothpick inserted in the center comes out clean.  Let rest for 10 minutes in pan then run knife around edges to loosen and turn out onto a rack to cool.  Peel off waxed paper.  Let cool completely before frosting.

* Any flour will work but the taste of fresh wheat flour enhances the coconuttiness of the cake.  I use King Arthur unbleached all-purpose white flour.

Whip together in mixer until light:

Add and whip until smooth, light and spreadable:

Spread frosting between the layers then frost entire cake.  Press coconut into the frosting.  Add sprinkles.

To tint coconut, put 3 drops of yellow food coloring and 1 drop of red food coloring in the bottom of a bowl.  Mix together with a toothpick to make orange.  Add 2 cups sweetened coconut and toss until colored.

I am a multi-media artist and modern alchemist practicing through the visual arts. View all posts by janebalshaw creative

10 thoughts on “Why make art and coconut cake.”

Get my journal entries by email!